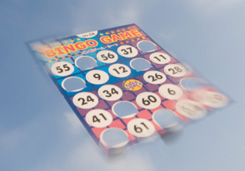 1.Kelly's eye and Buttered scone, and At the beginning, First on the board

2. Me and you and One little duck, Little boy blue

3. Dearie me and Debbie McGee, One little flea

4.The one next door and On the floor, Bobby Moore

7.God's in heaven, and Lucky seven, One little crutch

8. At the gate and Harry Tate, Sexy Kate, She's always late, One fat lady, Is she in yet

12. One dozen and Monkey's cousin, One doz' if one can and One and two - a dozen

15. Rugby team, Young and keen and Yet to be kissed

18. Key of the door, and Now you can vote and Coming of age

26. Half a crown and Bed and breakfast, Pick and mix

27. Little Duck with a crutch,Gateway to heaven

32. Three and two and Buckle my Shoe, and Three ducks

37. A flea in heaven and More than eleven

44. All the four, and Droopy drawers

51.Tweak of the thumb, The Highland Div

53. Stuck in the tree, The Welsh Div,The joker

54. House of bamboo and Clean the floor

55. All the fives, Double nickels

57. All the beans and Heinz varieties

69. Either way up and Any way up, The French connection and Yum yum

77. All the sevens, and Lucky seven

81. Stop and run and Corner shot

82. Fat lady with a duck and Straight on through

86. Eight and Six, and Between the sticks

87. Torquay in Devon and Fat lady with a crutch

As one can see, most of the balls according to the Bingo Calling Numbers rules are called this way to either rhyme or provide a clear idea of the ball being named.

The custom of applying the names is saved to make the unique atmosphere of the Bingo rooms cause since the new technologies have been implemented, the Bingo game started losing the image.

Now you know much about Bingo game and can try it at one of the premium casinos together with other popular casino games. Before you play for real money, learn the Bingo winning tips, casino blackjack rules, card counting blackjack strategy, Roulette Tips and learn to bet wisely!